Turning Hong Kong into
a green city of the future

Top 5 innovations to turn polluted, congested Hong Kong into a green city of the future

The modern city bulges with buildings, cars and people. Think of a city like Hong Kong and you picture streets lined with apartment blocks and skyscrapers; streets choking with smartphone-using, coffee-drinking pedestrians, and of course, endless traffic.
Mass urbanisation, for all its benefits, is followed by a trail of collateral damage: pollution, congestion, energy consumption, and waste.
SCMP staff reporters sifted through the technologies, both current and in development, that could transform how urban dwellers live their lives, and have a positive benefit on their surroundings. 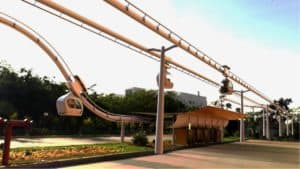 Rather than using buses, trains or subways to travel around, imagine a network of ski lifts that run across the city.
That’s what supporters of Personal Rapid Transit (PRT) systems, such as Metrino-PRT, hope to bring to urban centres around the world. These car-sized, driverless pods use electric rail networks suspended 5-10 metres above the ground. By making small stopping points off the main transit line, and by travelling while suspended above ground, these pods would drop passengers at precise locations without obstructing ground-level traffic. The technology would also tackle the pollution that plagues busy cities like Hong Kong, as it runs on electric power.