a solution to Auckland’s gridlock.

A New Zealand software expert and engineer has come up with a novel solution to Auckland’s gridlock problems.

The defining moment occurred on Sat, 6 Dec 2014 when most of Auckland’s car traffic on motorways and surrounding streets was paralyzed by a single accident on the Harbour Bridge.

The practical reality is that nothing, absolutely NOTHING, will solve such problems. No amount of tax payer’s money thrown at the increasing infrastructure and/or public transport systems will solve it. This has been tried and tested by more affluent societies and it is pointless to repeat their mistakes!

But this is exactly what Auckland City has been trying to do…………….

Einstein said: “We can’t solve problems by using the same kind of thinking we used when we created them.” 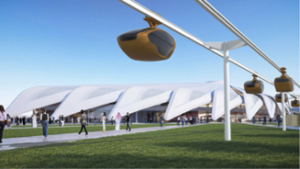 Ollie Mikosza’s METRINO-PRT transportation system would see Aucklanders travelling above the ground in futuristic-looking Pods. The Pods are each capable of carrying up to 5 people (as well as luggage, wheelchairs and bikes). They are suspended from thin, light guideways supported by poles similar to existing lamp posts along the streets.

This is the PUBLIC TRANSPORT SYSTEM which can realistically solve the combined problems of urban traffic congestion, increasing air pollution and financial subsidies –  at the same time.

The system is highly energy efficient, eco-friendly and costs much less to build and operate than any existing public transport. 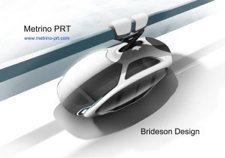 Mikosza, who has an MSc in Electronics and Computers, first had his brainwave when stuck in a San Francisco traffic jam 13 years ago. He was supervising IT projects around the world, designing and implementing over 100 complex computer systems. While stuck in bumper to bumper traffic, he imagined moving people above the ground in Pods, similar to ski lifts, but on a network of guideways instead of cables. The guideways would enable travel at much higher speeds with changes of direction.

Mikosza recalls, “After I applied for a patent, I discovered that the concept – namely Personal Rapid Transit – had been known for some 40 years. So I cannot claim to be the first to invent PRT. But I came up with a better technical solution and a new design.”

Since then he has filed numerous patents covering key design features of the system which he dubbed MISTER, (Metropolitan Individual System of Transportation on Elevated Rail); later renamed METRINO.

Many experts in this emerging field have confirmed that the METRINO is superior to other PRT concepts.

“Indeed, the European Union’s High Tech Commission granted my company US$10 million in matching funds for the development of a test facility and certification of METRINO. This followed a very thorough due diligence of METRINO’s technical and commercial feasibility.”

Mikosza built a full scale, working prototype of his transportation system and demonstrated it in a public square in Opole, Poland.

“Unfortunately, the $10 million grant was followed by various bureaucratic delays. Investors who were initially willing to put up the matching funds to activate the grant got tired of waiting for the bureaucracy. Consequently, we closed operations in Europe and I relocated the business in New Zealand.”

Mikosza is passionate that Aucklanders should benefit from this innovative concept. At the very least, he feels that Auckland ratepayers should be able to have a say in whether they want this system - and he would like to see the idea publicly debated.

Because of perceive “risk” in new technology, Mikosza proposes to build a 3 km pilot system which can be profitably operated as a Tourist Attraction. He would enter into a BOT Agreement with the City allowing his company to seek private funding to develop the initial system with an option to extend it across other parts of Auckland in years to come. This would be a “no risk” solution for the City.

PRT will not replace cars and is not meant to do so. But a 300+ km METRINO network would result in 30% - 50% reduction of vehicular traffic, with less petrol use and reduced pollution. It would replace city buses, trams and the expensive subsidized railway network which carries only 10 million passengers per year.

Mikosza says that 300 kms of PRT network would be capable of carrying over three million passengers daily (half of what London’s 400 km Underground is transporting). 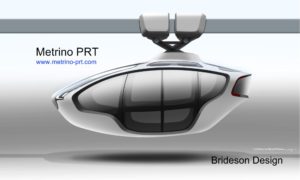 “Even if it carried only 10% of its capacity, i.e. 300,000 Aucklanders daily to and from work, school, entertainment, shopping etc, it would pay for itself in less than seven years.”

If funded from bank loans at 5% over a 20-year period, it would return a profit of $100 million per year during that period and $400 million annually thereafter (in today’s dollar value).”

Mikosza believes the current Auckland transport plan is “badly flawed, unsustainable and will result in a waste of billions of dollars of public money without any significant improvement to the transport situation.

“If the $60+billion intended for Auckland transport over the next thirty years was spent on METRINO instead, it would result in 8,000 to 10,000 kms of network, which would be enough to provide METRINO to ALL of the cities in New Zealand, not just Auckland.”

These figures have been borne out by a Princeton University 300-page report analyzing PRT for the US state of New Jersey. It calculated that if 16,000 kms of network were built, it would cost the state US$110 billion but would pay for itself in ten years and would replace 60% to 80% of car and bus trips.
Three other PRT systems have been built internationally as pilot studies, proving the merits of this new technology. One of them is used as ground transport at London’s Heathrow Airport.

Mikosza firmly believes that aerial types of PRT will inevitably replace all current public modes of transport, as much as cars replaced horses 100 years ago.
For information go to: www.metrino-prt.com