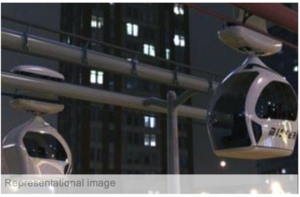 The Union Government has given nod for setting up India's first personal rapid transit (PRT) network for Gurgaon, Haryana.

As per the reports, the groundwork to roll the country's first Metrino Pod project is being laid by the National Highways Authority of India. The final approval of the project by the government was recently announced by Public Works (Building and Roads) Minister, Rao Narbir Singh.

The financing for this 'completely private project' will be made by the private company that sets up the personal rapid transit in the region.

This pilot project will cover a stretch of 13 kilometres from the Gurgaon­Delhi border to Badshapur Mod on Sohna Road with a total of 16 stations. For this, a budget of Rs 850 crore has been estimated. The feasibility report for the same has been submitted by the National Highway Authority of India (NHAI).

Every pod of Metrino taxi can accommodate up to five passengers and the fare is likely to be similar to that of Metro rail in Delhi.

Sized for individual or small group travel, personal rapid transit (PRT) is a transport mode combining small automated vehicles, known as pods, operating on a network of specially built guideways. The network consists of a number of stations or stops for passengers to get on and get off. The average speed of the pods is 60 kilometres per hour.

In 1967, Aramis project, an experimental personal rapid transit system was started by aerospace giant Matra in Paris. The project was, however, cancelled when it failed its qualification trials in November 1987

Between 1970 and 1978, Japan operated a project called "Computer­controlled Vehicle System" (CVS). In a full­scale test facility, 84 vehicles operated at speeds up to 60 kilometres